Fusion is the energy that powers the stars. Harnessing fusion on Earth would offer the world almost inexhaustible, environmentally clean and safe energy, see box 1. Research and development performed during a few decades already brought significant results. In the domain of magnetic confinement, for instance, 16 MW of fusion power have been produced in the JET tokamak [1] in 1997. Since then an international collaboration was set to build the next step device, ITER, the first fusion reactor that would deliver 500 MW of fusion power, 10 times the power injected into the device, see box 2. Recently, the European fusion scientists, under the banner of European Fusion Development Agreement (EFDA), developed and published a roadmap that describes the steps and the challenges to achieve the production of electricity from fusion before 2050, see box 3. The steps consist in completing the construction of ITER, operating ITER, designing, building and operating DEMO, a prototype reactor that would provide the electrical network with several hundreds of MW. The roadmap is divided into 8 missions, including the 'heat exhaust' issue: if one extrapolates from the present devices to a reactor grade device, the heat flux density produced by particles escaping from the plasma would reach levels that may exceed the material capabilities. To mitigate the heat flux impact several strategies are proposed. One of these strategies aims at the exploration of the so-called snowflake configuration. The scientists of the CRPP-EPFL were the first to realise a snowflake configuration in a tokamak, thanks to the high shaping capability of the TCV tokamak but especially to the hard work of these dedicated scientists. It should be emphasized that this work was subsequently awarded the R&D100 prize in 2012. This paper presents the achieved snowflake configuration and its advantages with respect to heat exhaust.

The TCV tokamak is equipped with 16 independently driven poloidal field coils that are used for shaping the plasma. Depending on the combination of coil currents, the plasma either lies against the carbon tile covered wall of the vacuum vessel, the so-called limited configuration, or is fully detached from the wall thanks to the presence of a null point in the poloidal field (X-point) and the resulting separatrix that delimits the plasma as shown in Fig. 1. In the latter configuration, the so-called divertor configuration, the plasma is not in immediate contact with the wall. Particles that escape from the plasma are diverted towards the vessel wall, along the 'separatrix legs', towards a more remote position than in the limited configuration. In addition, the journey of particles escaping from a diverted plasma is particularly long because the low value of the poloidal field in the vicinity of the X-point leads to almost entirely toroidal trajectories. For these reasons, higher performances can be achieved in diverted plasmas, making this configuration most suitable for fusion reactors.
However, those escaping particles may damage the surface of the divertor because they deposit their significant energy on a relatively small area leading to unacceptably high heat flux densities. The snowflake configuration has been proposed as a potential solution to mitigate the strong heat flux in the divertor.

A snowflake configuration is obtained when not only the poloidal field vanishes, as in the diverted configuration, but also its first derivatives. This second order null implies that six separatrix sprout from the X-point instead of four for the diverted configuration, as shown in sketch (b) of Fig. 2. The name 'snowflake' comes from this 6-fold geometry. In the sketch, the upper lobe represents the plasma enclosed in its separatrix while the lower lobes encompass two poloidal field coils. The vacuum vessel then cuts both lower lobes resulting in four separatrix legs instead of two. It directly reveals the advantage of such a configuration: the heat flux power may be diverted towards four sections of the vacuum vessel walls, thereby reducing the heat flux densities onto the divertor plates. If the configuration slightly deviates from the perfect snowflake shown in Fig. 2b, it produces the other configurations shown in Fig. 2. These variants of the snowflake configuration are labelled SF+ (snowflake plus) the conductors, respectively. The distance between the two X-points, indicated by the green crosses, normalized by the minor radius of the plasma torus, is used as the measure, denoted σ, of the proximity to the perfect snowflake.

The snowflake configuration was proposed by Ryutov et al [2,3]. It was experimentally realised for the first time in the TCV tokamak at the CPPP-EPFL [4] and then reproduced in the NSTX spherical tokamak at the Princeton Plasma Physics Laboratory [5] and more recently in the DIII-D tokamak at General Atomics [6].

Fig. 3 shows an example of a TCV discharge wherein the plasma was vertically shifted to reveal the different snowflake configurations described in the schematic representation (Fig. 2). The plasma equilibrium reconstructions, based on magnetic measurements, are shown in the first row. The numbering 1-4 helps to identify the regions where the separatrix legs reach the vacuum vessel walls. Locations 1 & 4 are called primary locations since they correspond to the divertor legs of the traditional divertor configuration (field lines surrounding the plasma hit the wall at the primary location). In opposition locations 2 & 3 are called secondary regions due to the absence of direct connection with the vicinity of the plasma.

The second row exhibits tangential views of the plasma obtained with a CCD camera. Since most line radiation originates from relatively "cold" plasma, the measurement of the emitted visible light provides an excellent mean to locate the edge of the plasma as well as the separatrix legs. This series of measurements shows a clear agreement between both information sources.

In all three cases shown in Fig. 3, the emitted light clearly reveals that all separatrix become active. This suggests that the low poloidal field in the vicinity of the null point enhances the cross-field transport. If this transport were sufficiently large it could not only distribute the heat among four divertor legs instead of two, but also widen the power flux channel at each leg and thereby further reduce the power flux density onto material surfaces. Dedicated measurements were done in the most promising scenario for ITER: the H-mode.

ITER, currently under construction in the south of France, aims to demonstrate that fusion is an energy source of the future. ITER is a collaboration between European Union, including Switzerland, Japan, South Korea, China, India, Russia and United States. 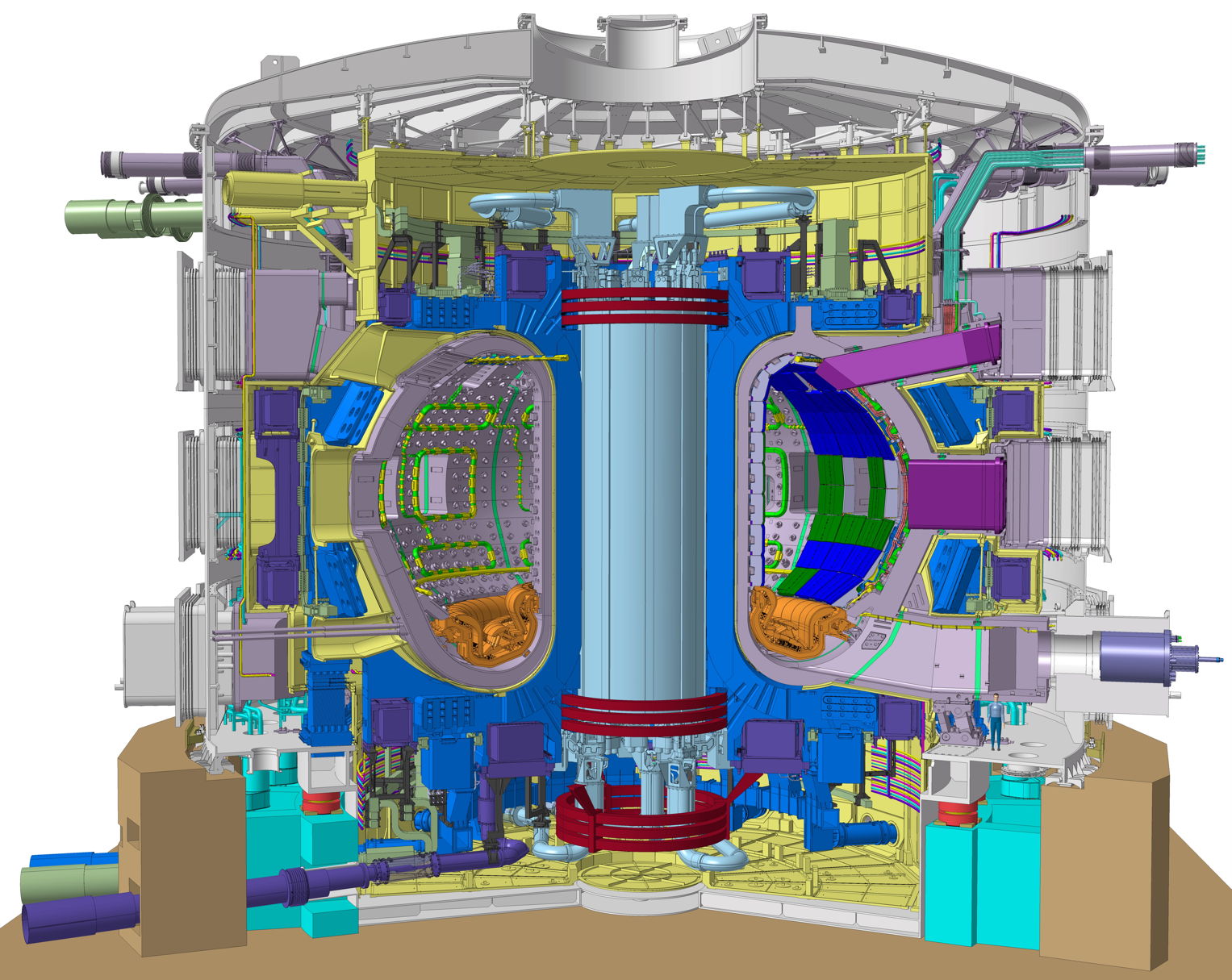 In the early 1980's, tokamak experiments performed in diverted configuration revealed the existence of an operational regime wherein the confinement of particles and energy suddenly increases by a factor of two [7]. It was called H-mode regime (H for 'high') and has since been obtained in most tokamaks. By comparing results obtained in several devices it was shown that the additional heating power should exceed a threshold that depends on the plasma density, the plasma size and the main toroidal field [8]. The improvement in the plasma confinement properties observed in this H-mode regime makes it the selected operational mode for the ITER baseline scenario. Unfortunately, H-modes are generally accompanied with plasma edge instabilities (ELM) that repeatedly release particles towards the divertor in sharp bursts that threaten the divertor material.

H-modes are also regularly obtained and investigated in TCV diverted plasmas. Soon after the realisation of the first snowflake in TCV, efforts have been dedicated to the search for H-modes in snowflake configuration and results came soon: the access to the H-mode regime occurs at approximately the same power as in the quadrupole diverted configuration. The confinement improvement is similar or even slightly better.

Regarding the heat flux to the divertor, dedicated measurements were performed. The high pressure observed near the second order null even increased the cross-field transport relative to the conventional configuration. This resulted in an efficient distribution of the power on the secondary divertor regions as shown in Fig. 4. The power deposited onto the divertor tiles, measured in regions labelled 1 and 3 in Fig. 3, shows a strong reduction in the primary divertor region while the secondary zone receives a significantly larger fraction. [9].

CRPP-EPFL scientists have demonstrated the feasibility of the snowflake configuration and shown the advantage of the corresponding increase of the number of separatrix legs, in the form of a significant reduction of the heat flow onto the divertor plates. While snowflakes will not likely be achievable in ITER, design studies for the subsequent device, DEMO, are evaluating the snowflake configuration as a potential divertor solution.

European scientists established the necessary steps and challenges that should be solved in order to realise a fusion reactor that would provide the electrical network with electricity before 2050.

The roadmap to fusion electricity can be downloaded here.